Numerous types of microscopic organisms coexist in soils. These microorganisms contribute to soil formation and are responsible for driving nutrient and organic matter cycling, soil fertility, soil restoration, plant health and ecosystem primary production. Beneficial microorganisms include those that create symbiotic associations with plant roots, promote nutrient mineralization and availability, produce plant growth hormones, and are antagonists of plant pests, parasites or diseases (biocontrol agents). Many of these organisms are already naturally present in the soil, although in some situations it may be beneficial to increase their populations by either inoculation or by applying various agricultural management techniques that enhance their abundance and activity.

is a group of microscopic fungi in the soil that can be found in almost every type of habitat.  Mycorrhizas are symbiotic associations essential for one or both partners, between a fungus (specialized for life in soils and plants) and a root of a living plant. The association is generally mutualistic  where the plant supplies carbohydrates to the fungus that  allow the fungus to develop and settle inside the root; In return, the fungus provides mineral nutrients and water that are extracted from the soil solution.

The mycorrhizal fungi are characterized by associating and colonizing the roots of plants and grow in the rhizosphere resembling an extension of the roots themselves, forming a network of fine filamentous structures called hyphae with which they facilitate a greater water absorption and nutrient availability to the plants, while also preventing erosion.

These are the most well-known effects of mycorrhizae, although other beneficial effects include the protection of plants against the attack of pathogenic soil borne microorganisms. Mycorrhizal associations began more than 400 million years ago, with the first terrestrial plants, so that both organisms have evolved together to this day. Mycorrhizae are a stable indicator of biological activity in the rhizosphere.

There are several types of mycorrhizae, differentiated from each other by the group of plants that is colonized and by the way in which the fungus is established at the root. 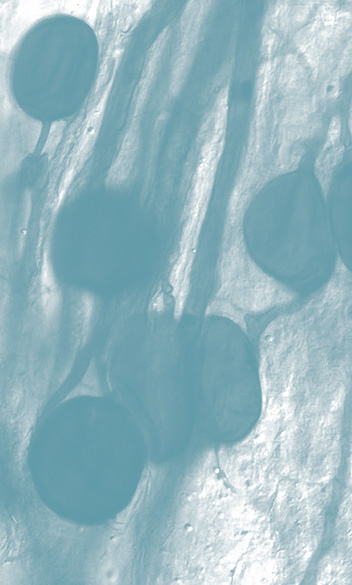 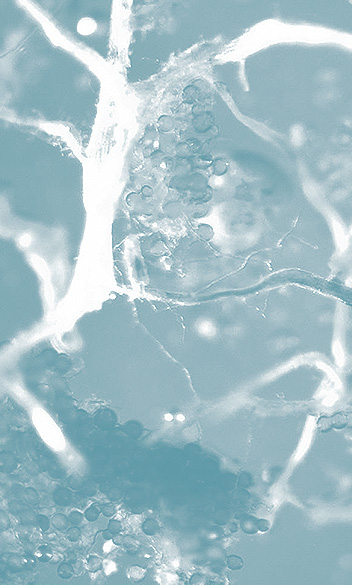 They are the most well-known and perhaps most common mycorrhizal symbioses. The fungal hyphae penetrate root cells and develop branching morphological structures inside the cells (arbuscules), allowing a vast exchange surface between both organisms. The majority of horticultural, ornamental and fruit plants form endomycorrhizas

They are formed by the fungi that we usually know as mushrooms. In this type of association, unlike other mycorrhizal relationships, ectomycorrhizal fungi do not penetrate their host’s cell walls. Instead, they form an entirely intercellular interface, consisting of highly branched hyphae forming a latticework between epidermal and cortical root cells, known as the Hartig net. Most forest and woody species form this type of symbiosis.

is a mutualistic symbiosis formed between members of the plant family Ericaceae and several lineages of fungi. The symbiosis represents an important adaptation to nutrient poor soils that species in the Ericaceae typically inhabit. Ericoid mycorrhizas are characterized by fungal coils that form in the epidermal cells of the fine hair roots of ericaceous species. This mycorrhiza is formed in some ornamental and fruit species such as azalea, carnation, camellia, heather, rhododendron, blueberry and cranberry.

In addition to these, there are other types of mycorrhizal associations of less importance in agriculture and landscaping, since they involve a smaller number of vegetal species and soil fungi.

Some plants are not able to associate with any mycorrhizal fungus like cabbage, broccoli, cauliflower, spinach, radish, turnip and mustard.

Other microorganisms involved in soil and crop improvement

In addition to mycorrhizae, there is a large number of microorganisms whose role is essential for the balanced development and health of plants and soil. Fungi such as Trichoderma and Pochonia, provide protection against phytopathogenic microorganisms. Another important group is Plant Growth Promoting Rhizobacteria, known as PGPRs. They participate actively in processes such as the fixation of nitrogen in the soil, the solubilization of phosphorus, the mineralization of nutritive elements, the decomposition of organic matter, the production of phytoregulators and biocontrol.